European car sales continue to tumble and the problem is spreading from southern countries to the more prosperous north.

For the whole region, registrations dropped to 1.35 million vehicles last month from 1.5 million a year earlier, the Association of European
Carmakers said.

A 10 percent decline In the first three months of the year has manufacturers trimming their sales outlooks for this year and preparing the ground for possible profit warnings.

Most worrying, previously solid German sales fell 17 percent in March and 13 percent in the first quarter.

Comparing the month of March over a five year period, sales were still weak from the economic crisis in 2009, picked up in 2010 and have been sliding ever since. March 2013 saw them down by 10.3 percent from a year earlier.

PSA Peugeot Citroen, Toyota and Ford were the worst performers – down around 16 percent from a year earlier.

But even Volkswagen posted a 15 percent year-on-year decline for its main brand and nine percent for the VW group, with Audi down 8.6 percent.

Britain was a rare bright spot with a 5.9 percent acceleration in sales in March, but the introduction of the newest 2013 number plate during the month artificially boosted showroom traffic.

And there is evidence that carmakers are having to offer big discounts to get sales, which adds to their losses. 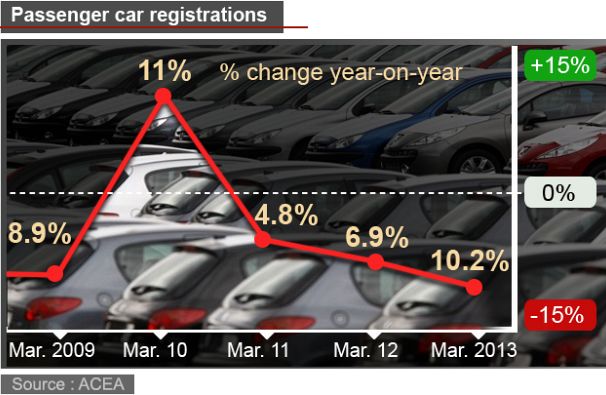