Yesterday in history: ten years ago, after US forces had invaded Iraq, a giant statue of Saddam Hussein was torn down in central Baghdad, on 9 April. American soldiers helped; they were surrounded by ordinary Iraqis. It was a momentous occasion.

Then came more grinding years of struggle and bloodshed.

The country is still damaged and impaired, far from all Iraqis enjoying peace. One British estimate of the civilian body count is as high as 122,000. Others of those who have died are higher.

A cafe owner in Baghdad said: “I raised my sons and saw them get married and sent them to universities. I watched them die. You ask me if it’s better or worse now compared to ten years ago. I still had my sons ten years ago. So I think the answer is obvious.”

The violence didn’t end with the pullout of US troops in December 2011. Just days ago, on 6 April, a suicide bomber in the midst of an electoral rally 60 kilometres north of Baghdad killed dozens. In March, more than 200 civilians were killed.

Some things have improved. People can speak out more freely, investors have arrived, cautiously, tourism is developing, though weakly, Iraqis’ purchasing power is on the rise, along with salaries.

On the other hand, unemployment is high: 18 percent. But that figure is abstract, since for the young, aged 15-29, it is 57 percent.

Malnutrition is less serious than when it was measured in 2007 but daily hunger is still the norm for almost two million Iraqis.

Conditions for women are worse. On an international gender equality scale of 148 countries, Iraq is seen in 120th place, compared to Algeria, 74th, and Saudi Arabia, 145th.

So the tenth year marking groundshaking change for Iraq is not cause for much celebration.

Another Baghdad resident said: “One might consider it an anniversary but I don’t. There’s insecurity, political crisis and the deteriorating economy. The people are still living in troubled conditions; they can’t feel that today is a memory of either a good thing or a bad thing.”

In a few days, elections for membership in provincial assemblies will be held. In a political context in which Shiites hold power and Sunnis are marginalised, more violence is expected.

Baghdad’s Firdos Square today where the statue of Saddam Hussein once stood: 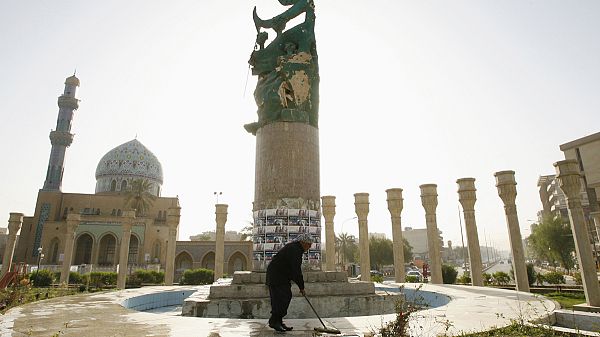 Ten years after: the Iraq War in 10 figuresDirect CasualtiesThe cost of warPrioritiesCleaning up the radioctive messGhosts at homeThe Refugee Situation | Create infographics

Prince Harry speaks out: 'I want you to hear the truth from me'