Controversy over the decision to send two Italian marines to stand trial in India has grown after Italy’s Foreign Minister resigned in protest.

Giulio Terzi has quit, claiming he was not listened to by Italy’s prime minister Mario Monti and his government.

Terzi opposed the decision to send marines Massimiliano Latorre and Salvatore Girone to stand trial in Delhi. The Italian marines are accused of killing two Indian fishermen off the coast of Kerala in February 2012. Latorre and Girone, who say they mistook the fishermen for pirates, face murder charges.

“I resign in contention with the decision to send the marines back to India. The misgivings I expressed had no effect on the decision taken. I am resigning because for 40 years I have maintained, and still maintain, that the reputation of the country, the armed forces and Italian diplomacy, should be safeguarded.
My reservations had no impact and the decision was not mine. My voice went unheard. I am also standing down in solidarity with our two marines and their families,” he insisted.

The Italian government originally reneged on an earlier agreement to send Latorre and Girone back to India to stand trial.

However, after 11 days of tense negotiations between the two countries, which included India threatening to downgrade diplomatic ties and Italy receiving assurances the marines will not face the death penalty, Latorre and Girone were flown back to India on March 22.

Prime Minister Mario Monti said he was “astonished” by Terzi’s resignation. Italian Defence Minister Giampaolo Di Paola says he will not quit his job. Admitting it would be easy for him to resign, he explained his decision to remain in post:

“I know what Massimiliano Latorre and Salvatore Girone, looking me in the eye, said on the night of March 21: ‘Don’t abandon us’. I won’t abandon the ship,” Di Paola told parliament. 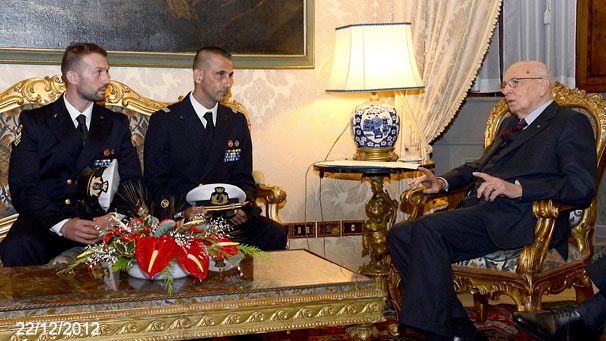