You can’t just stroll into La Ciotat’s naval shipyard. One of France’s top naval building sites up until the 1980s, it is now home to leisure boats, especially superyachts, whose owners keep a low profile.

Which means you have to show your credentials before being let in. Until now, we have only been able to see the site from afar. Early in the morning, we climbed to the top of the ridge road which links La Ciotat to the neighbouring town of Cassis.

Our main goal was to shoot some pictures of the sunrise over La Ciotat, you know, the kind of pictures you can speed up in order to create a nice special effect.

Our other goal was to try to hold the camera still. The Mistral is a very violent wind. Gusts of winds of up 95 kilometres an hour, the forecasts said. Just imagine the windchill factor – but the pictures were very beautiful.

Back to the shipyard and the harbour, which lie far down beneath us. A vast area covering dozens of hectares, starting with a large stretch of industrial wasteland, that ends in a huge platform dominated by some very impressive luxury yachts.

Among these boats hibernating here during the winter, we spot a strange-looking vessel: PlanetSolar, the first ever solar-powered ship to have sailed round the world – in 585 days. But the true record was not speed. The aim was to show that the two motors needed for the whole circumnavigation could be powered by the sun alone.

PlanetSolar is a funny-looking ship, a futuristic, flattened catamaran without any sails. A very imposing vessel. That was the real surprise. Thirty metres long, weighing in at more than 100 tons. You enter this ship as you would a plane. Pascal Goulpié, director and co-founder of this marvellous adventure, welcomes us and shows us around. 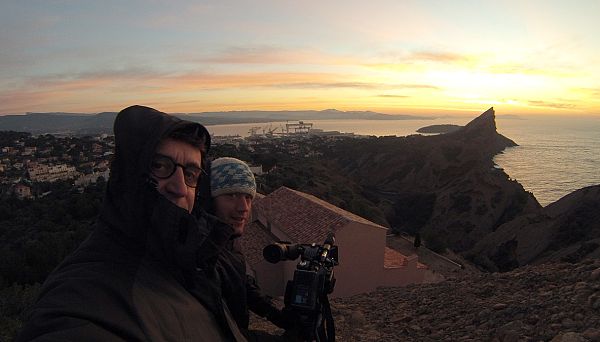 And there I was imagining a spartan and narrow kind of prototype. Of course, that’s the advantage of a catamaran: space. The cabin inside is huge. In comparison, the galley seems tiny. The individual cabins are large enough but have no portholes. Shame you can’t see the sea from your bunk. But let’s not be difficult. The cockpit is a pilot’s dream, though it must get hot there in warm climates. It leads on to a huge 537 m2 deck. These are, of course, the solar panels which fuel the 11-ton battery.

But the most impressive part is yet to come: in the cabin is a map of the world, which traces the journey of PlanetSolar’s first ever adventure. It is the stuff dreams are made of. We’re thinking Magellan, who was the first sailor not to make it round the world as he was stupidly killed in a battle with a Cebu tribe. Only one of the Portuguese explorer’s five vessels made it.

PlanetSolar’s round-the-world trip was much more peaceful and pacific: Gibraltar, the Canaries, Panama, Polynesia, the Great Coral Reef, Hong Kong, the Strait of Malacca, the United Arab Emirates, Suez, before reaching the finishing line in the Mediterranean. How can this not make you dream of far-away sunsets and the wind in your sails (sorry: sun on your panels). And then we meet Gérard d’Aboville, the man who has paddled across oceans. He is the sponsor and one of PlanetSolar’s earliest supporters, and has been keeping a close eye on the vessel’s second lease of life.

A second life made up of expeditions to the Gulf Stream with scientists from the University of Geneva, led by climate specialist Martin Beniston. PlanetSolar will soon leave the shipyard in La Ciotat for Monaco, from where it will head to Florida. From there, it will follow the warm currents that regulate our temperate climates. PlanetSolar will travel all the way up to where the sun shines nearly 24 hours a day, on the edge of the polar circle.

And that’s where the taste for adventure catches up with me. So I inquire, you never know. They’re looking for a… cook. Well, I wouldn’t mind being the man powering the only “exception” to the solar rule on this vessel, that is the gas-powered cooker!

Smart farming: a revolution for traditional olive production on Crete

Smarter than the average home - technology and assisted living