France now has 1,400 troops on the ground in Mali, according to the French Defence Minister Jean-Yves Le Drian.

He added that although fighting had been taking place around Diabali overnight, no more had been reported today.

The town was taken by Islamists on Monday.

Retaking Diabali is said to be a priority for the French. Hundreds of troops have been sent from the nearby town of Niono.

While columns have been advancing north towards the centre of the country, an alert has been reported in a town closer to the capital.

Malian troops have been sent to Banamba, 140 kilometres from Bamako, after Islamist fighters were spotted in the region.

Clashes have also been reported in the area around Kona to the north-east. Its fall to the militants last week was the trigger for the military intervention.

The French Defence Minister said the town had not been retaken by government forces, contrary to earlier reports.

French fighter planes are said to have attacked Islamist police headquarters well to the north, at Timbuktu.

The interim president in Mali, Dioncounda Traore, visited the French military airbase in Bamako on Wednesday. He said he wanted to thank soldiers on behalf of all Malian people.

France has said it has no wish to fight alone and has been pushing for the deployment of the West African force already backed by the UN.

The imminent arrival of the first contingent from Nigeria should come as some relief to French forces. 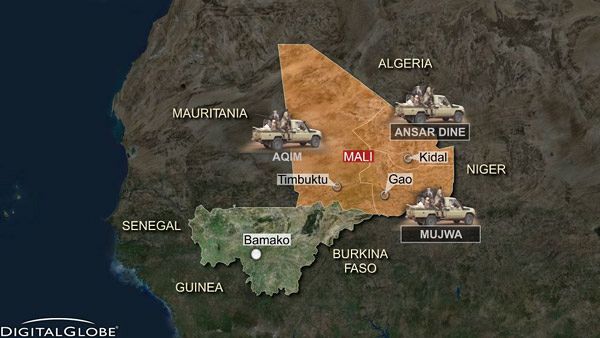