Argentine war veterans gathered in Buenos Aires on Thursday, to voice their support for an open letter which calls for talks over the Falkland Islands.

“I reiterate our invitation for us to abide by the resolutions of the United Nations,” Fernandez writes, reasserting her country’s sovereignty claim.

The Falklands are known as the Malvinas in Argentina.

Ernesto Alonso, from the Centre of Veterans of the Malvinas Islands, said: “It is fundamentally necessary that Great Britain sits down and has a dialogue.”

Cameron rebuffed the demands, saying it was down to islanders to decide their future, not Argentina.

“Whenever they have been asked their opinion, they have said they want to maintain their current status with the United Kingdom,” he said.

“They are holding a referendum this year and I hope the president of Argentina will listen to that referendum and recognise it is for the Falkland islanders to choose their future.”

Britain and Argentina fought a 10-week war in 1982 over the remote South Atlantic islands.

The Falklands are part of Britain’s self-governing overseas territories. 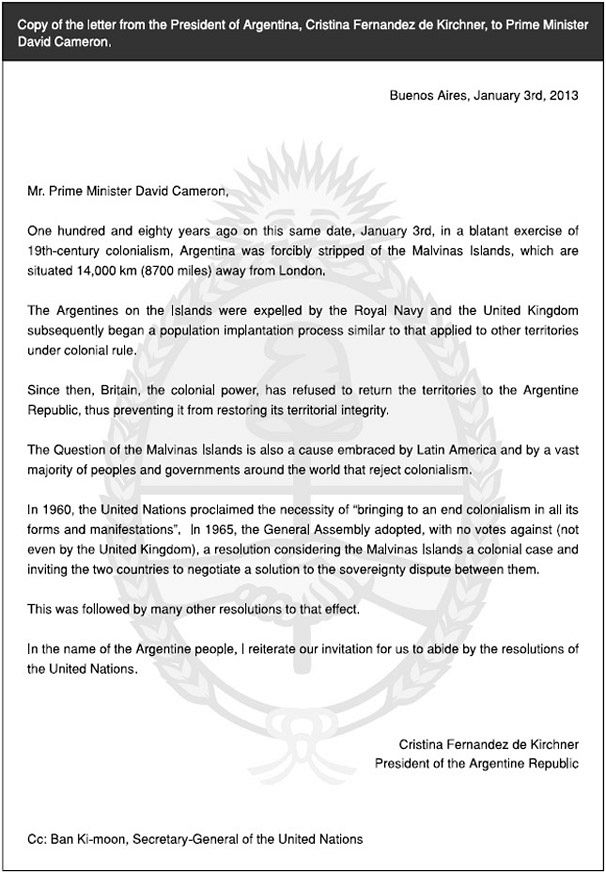