Vitoria-Gasteiz. I might well have lived in Spain, although it was on the other side of the country in Seville, which hadn’t had its Expo and its development at the time. So, let’s take a look at Vitoria-Gasteiz. The capital city of Spain’s Basque Country. I think I’m going to learn a thing or two while filming there. Ah yes, the filming – so Vitoria-Gasteiz, capital of Alava province and the Spanish Basque community.

It’s a visit to the greenest city in Spain, even Europe. The proof is in the title that it’s held all through 2012 – the European Green Capital according to the European Commission. I get in touch with my Spanish contacts. “I’m going to Vitoria-Gasteiz”. All are enthusiastic. I am lucky to be going to a beautiful city that respects its historic monuments and the environment. The Lyon to Biarritz leg of the journey flew by. I finished by car, the night preventing me from discovering the countryside.

The city was welcoming despite the biting cold of a calm Sunday evening. I set about finding a restaurant and obviously Pintxos (don’t panic, X is pronounced CH). It was no easy task on an evening when establishments traditionally remain closed. After a short investigation, I found what I was looking for and dived into tasting the small dishes on the bar. Octopus in creamed potato and small grilled green peppers. 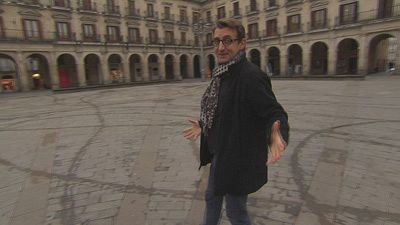 The following day I found the city, dense, compact, calme, criss-crossed by public transport of all sorts, and a multitude of bikes, a form of transport still hardly developed in Spanish cities. And to achieve all this, the city went big: a complete overhaul of public transport, traffic routes re-planned with priority lanes around some areas and speed limits of 30 kph, or even 20, or 10. Cameras automatically check number plates of cars that only go through the city centre. So Vitoria is the city in Spain where there’s less car use and more emphasis on bikes and public transport.

This policy, which by the way has survived the changes in political power, has borne fruit and for a year the city has been dubbed European Green Capital between Hamburg last year, and Nantes which picks up the baton next. And the green belt around the outskirts - at the moment it’s not continuous, but the city wants to link it up completely.

To the north-east there’s a true natural park – a wetland zone which had once been drained for agricultural needs. Now it’s been re-instated and it hosts birds of all kinds. A herd of deer have been introduced to stop the undergrowth becoming overgrowth. And there’s still a bit of tourism for me to do in the city. I discover “Celédon” a character who after being lowered into a delirious crowd, opens the city’s summer festivities. 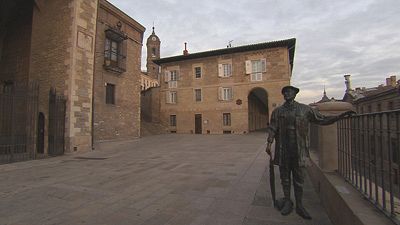 I also come across an imposing statue celebrating the battle that carries the same name as the city. You can see Napoleon’s troops defeated by a certain Wellington. It was here that French ambitions on the Iberian peninsula came a cropper.

Time to go home already, and the route takes me through the middle of some impressive Basque mountains. Its green credentials have already been shown in the city, the rest remains for me to discover.