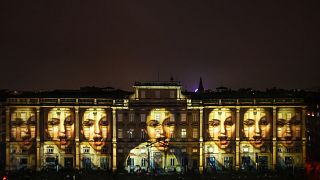 This week, French Santas swapped their sleighs and reindeers for oars and boats and swept down the Alsatian capital, Strasbourg.

This week, French Santas swapped their sleighs and reindeers for oars and boats and swept down the Alsatian capital, Strasbourg.

Morocco fans have been celebrating at home and abroad their team's triumph over Spain in the last 16 of the World cup.

Several electric vehicles being transported by truck went up in flames on the M1 in England.

An oil spill has polluted over 4 kilometres of coastline at Lechería, one of Venezuela's top tourist destinations.

Hundreds gathered on New York's Roosevelt Island to join one of French artist JR 's participatory performances, standing alongside a portrait of 16-year-old Iranian Nika Shahkarami, who went missing and died after attending a protest in Tehran.

And Lyon's annual Festival of Lights has kicked off, with sobriety and pleasure in mind.