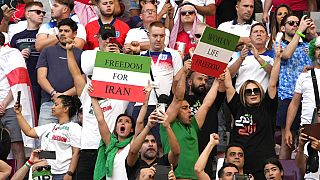 Iran fans sing protest songs outside the stadium in Doha

After their World Cup opening game on in Doha on Monday, a small number of Iranian fans sang in solidarity with protesters in their home country.

Supporters wearing Iranian jerseys and holding signs reading "Women, life, freedom" could be seen outside the stadium after the match.

They were supporting the demonstrations in Iran which have been triggered by the death of Mahsa Amini, a 22-year-old woman who died on 16 September after she was detained by Iran's morality police.

Protests had been expected as Iran faced England in both teams' opening game of the tournament.