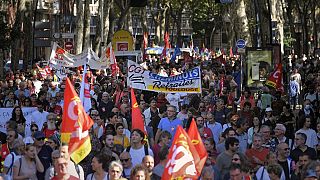 “It's time to go back to work,” French Prime Minister Elisabeth Borne said Tuesday about strikers at TotalEnergies oil refineries.

“It's time to go back to work,” French Prime Minister Elisabeth Borne said Tuesday about strikers at TotalEnergies oil refineries.

However, rail and other transportation workers, trucking and bus companies, some high school teachers and public hospital employees have heeded a call by an oil workers' union to push for salary increases and protest government intervention in refinery strikes across France.

According to the Interior Ministry, over 100,000 people marched Tuesday in multiple protests across French cities.

The marches come after the left-wing CGT union rejected a deal over a pay increase that oil giant TotalEnergies struck with two other unions last Friday.

The CFDT and CFE-CGC unions, which together represent a majority of the group’s French workers, agreed to a 7% pay rise and a financial bonus.

But the CGT rejected the deal, holding out for a 10% pay rise and urging that the protests continue.