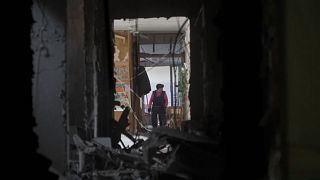 About 15 people were in the basement of the school, including two children and a disabled person, when the attack hit.

A 63-year-old woman, who worked as a caretaker at the school, was killed.

Rescue workers and firefighters searched for her body for hours under the debris of the building.

As rescuers began digging through the rubble, the victim's daughter ran desperately towards the collapsed building, while relatives and friends pulled her back and tried to comfort her.