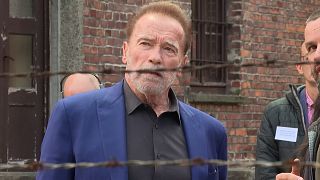 Film icon Arnold Schwarzenegger visited the site of the German Nazi death camp of Auschwitz on Wednesday, where he met with a Holocaust survivor and his relatives to deliver a message against prejudice and hate.

The "Terminator" actor saw the barracks, watchtowers and remnants of the gas chambers that bear witness to the extermination of Jews and others by the Germans during the Second World War.

He was alongside Simon Bergson, born after the war to Auschwitz survivors and president of the foundation.

His visit to the site in southern Poland, a region under German occupation during the Second World War, was his first and part of his work with the Auschwitz Jewish Centre Foundation, whose mission is to combat hatred through education.