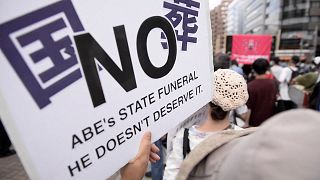 Hundreds of people marched peacefully through central Tokyo on Tuesday towards the hall where former Prime Minister Shinzo Abe's state funeral was being held to show their opposition to the event.

One sign read in English: "We say No to state funeral", with an image of a power salute fist.

The protesters said the legality of the state funeral was questionable, as almost all state funerals in Japan have been held for the emperor.

Abe's state funeral was decided by the Cabinet and did not go through a parliamentary approval process, although the bill is paid by the taxpayer.

Recent opinion polls show that more than half of those polled are opposed to the state funeral.