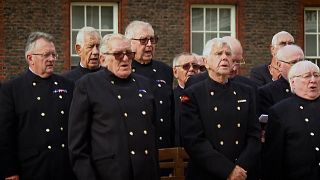 The Chelsea Pensioners traded their famous scarlet tunics for somber navy blue on Tuesday as the old soldiers bid farewell to their commander in chief, Queen Elizabeth II.

The Chelsea Pensioners traded their famous scarlet tunics for somber navy blue on Tuesday as the old soldiers bid farewell to their commander in chief, Queen Elizabeth II.

The veterans, some leaning on canes and others using mobility scooters, gathered under a steel gray sky in the quadrangle of the Royal Hospital Chelsea for a service of remembrance for a woman who led Britain and the nation's armed forces for 70 years.

Teetering but determined, the 150 or so men and women stood as straight as they were able as a bugler played "The Last Post," a tradition of British military funerals.

Wearing full camouflage from the day's exercises, Rutter was given a pair of white gloves so he could shake the queen's hand.

The late queen, who served as a truck driver and mechanic in the last months of World War II, became head of the armed forces when she ascended to the throne in 1952.

She was also the patron of the Royal British Legion, the nation's main veteran's support charity, and led the national ceremony of remembrance held every year on the anniversary of the end of World War I.

The Chelsea Pensioners, known for the knee-length scarlet tunics and black caps they wear to public events, are all army veterans who have chosen to live at the hospital founded in 1692 to care for old soldiers.

Today, the company includes veterans who served from the battlefields of World War II to the Falkland Islands.

These men and women made their own sacrifices for queen and country, and on Tuesday they gathered around a platform made of drums for a traditional drumhead service to show their respect for a woman who dedicated her life to the nation at the age of 21

A few hankies appeared when the assembly sang the hymn "Abide With Me.''

But the tears flowed with "God Save the King'' it was a line the pensioners hadn't sung for 70 years.