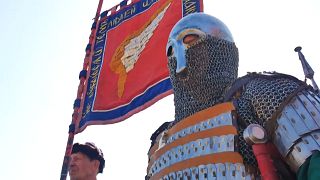 Hundreds of Russian history enthusiasts re-enacting the Battle of the Ice.

Young Ukrainians rebuild destroyed homes in the village of Horenka

Hundreds of Russian history enthusiasts re-enacting the Battle of the Ice.

Surrounded by dozens of men in chainmail and helmets playing dead in a field, an impersonator of mediaeval Russian prince Alexander Nevsky raises his sword and roars.

Surrounded by dozens of men in chainmail and helmets playing dead in a field, an impersonator of mediaeval Russian prince Alexander Nevsky raises his sword and roars.

"This land is Russian, always has been, and always will be!"

It was on this spot near Lake Peipus on Russia's border with Estonia that eight centuries ago Nevsky repelled a force of Teutonic Knights who wanted to convert Russia to Catholicism.

Known as the Battle of the Ice because it was fought largely on the frozen lake, the clash in April 1242 is celebrated as a great victory against efforts to turn Russia away from Eastern Orthodox Christianity.

For the hundreds of history enthusiasts re-enacting the battle on a recent August day, that victory is especially resonant today, as Russian forces wage an offensive in Ukraine framed by the Kremlin as part of an enduring conflict with the West.

"We are fighting against Europe just like our ancestors did," says Oleg Yakontov, a 56-year-old retired paratrooper, holding a sword and shield as sweat drips off his face.

Historical re-enactments are a popular pastime in Russia, whether of mediaeval battles, Napoleonic-era clashes or the fierce fighting of World War II.