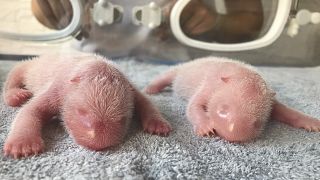 A Giant panda named Qin Qin gave birth to twin cubs at a breeding base in northwest China's Shaanxi Province on Tuesday. The male cub weighed 176.4 grams while the female cub weighed 151.2 grams when they were born at the Qinling Giant Panda Research Center between 04:00 and 05:00 on Tuesday morning. The twin cubs are reported to be in good condition. Qin Qin, who was also born at the Qinling Giant Panda Research Center in 2013, is the first captive-bred Giant panda in Shaanxi Province This is the second time Qin Qin has given birth after having produced female twins, Qin Xiu and Qin Mei, in 2020.

The San Diego Zoo Safari Park is celebrating the birth of a southern white rhino calf. The male was born on August 6 and made his debut with his mother, Livia, this week. The zoo says the calf was conceived through natural breeding to Livia and father J Gregory. Zookeepers say the calf is healthy and full of energy and mom Livia is very attentive and protective of her baby. An estimated 18,000 southern white rhinos remain in native habitats worldwide.