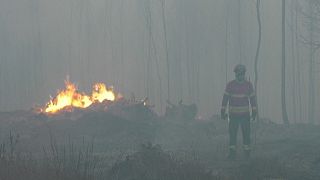 About 400 firefighters were mobilised this weekend to tackle the blaze about 40 kilometres (25 miles) north of Lisbon.

Residents tried to slow the progress of the flames by watering their gardens, while the flames also engulfed nearby forests, according to television footage.

An old people's home for 30 people was evacuated as a precaution.

Parts of northern and central Portugal were placed under a state of alert this weekend due to a "sharp rise in temperatures" of more than 40 degrees Celsius (104 degrees Fahrenheit) that is expected to last until at least Tuesday, according to the meteorological institute.