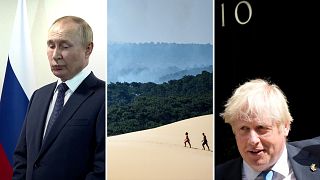 Russian President Vladimir Putin was left awkwardly waiting and fidgeting by Turkish counterpart Tayyip Erdogan ahead of talks in Tehran on Tuesday. Hands clasped, mouth twitching and his stance shifting, the Russian leader had to wait for 50 seconds before Erdogan appeared.

A strike in the heart of the residential area of Kramatorsk on Tuesday has set fire to a building and left one dead and six injured with at least one in serious condition, according to local authorities.

Footage shot by citizens and firefighters revealed the magnitude of the wildfires that have been burning in Spain over the past few days. Train passengers were left fearful as they travelled past burning wildfires on Monday in the northwestern Zamora province.

In the province of Zaragoza, another citizen was driving back home late on Tuesday when he came across towering flames bordering the A2 highway.

As Europe is under the grip of an unprecedented heatwave, rain storms caused flash floods, temporarily closed roads and highways, and stranded drivers in areas of New York City on Monday.