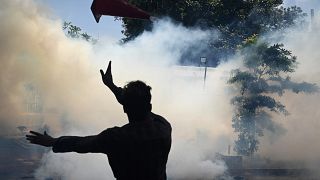 Thousands of Sri Lankans demanding that the prime minIster resign rallied outside his office in Colombo, some stormed the compound despite security presence.

As the protests escalated outside the prime minister's compound, his office imposed a state of emergency that gives broader powers to the military and police and declared an immediate curfew in the western province that includes Colombo.

Police used tear gas to try to disperse the crowd but failed and more and more marched down the lane and towards the office.

Some protesters who appeared to be unconscious were taken to a hospital.

Meanwhile, President Gotabaya Rajapaksa fled the country, slipping away only hours before he promised to step down under pressure from protesters angry over economic chaos that has triggered severe shortages of food and fuel.

Rajapaksa and his wife left aboard a Sri Lankan Air Force plane bound for the Maldives, the air force said in a statement.

While Rajapaksa agreed under pressure to resign, Prime Minister Ranil Wickremesinghe said he would leave once a new government was in place.

But that was not enough for many, especially since Rajapaksa appointed Wickremesinghe as acting president after fleeing.

Thousands of people have gathered outside Madrid's Las Ventas bullring to protest against Spain's bullfighting tradition.