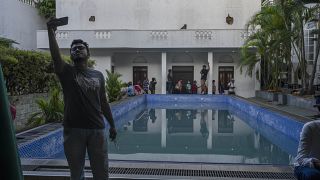 For many who had traveled on overcrowded trains and buses from outside the capital, Colombo, this was the first time they had laid eyes on a residence so grand.

On July 9th, thousands of angry Sri Lankans descended on the residence in fury against President Gotabaya Rajapaksa, who they blame for an unprecedented economic meltdown that has throttled the lives of the nation's 22 million people.

They turned over barriers and then swarmed the lawns to enter the palatial residence and occupy it.