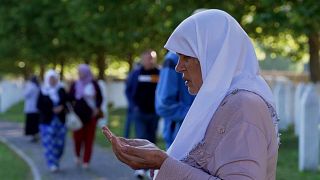 More than 8,000 men and boys from the Bosniak ethnic group, which is made up primarily of Muslims, perished in 10 days of slaughter after the town was overrun by Bosnian Serb forces in the closing months of Bosnia’s 1992-95 fratricidal war.

So far, the remains of more than 6,600 people have been found and buried at the cemetery. The remains of 50 more victims, recently found in mass graves and identified through DNA analysis, will be put to rest there on Monday.

Among the 50 bodies there are three male teenagers, who's scattered bones were found in several mass graves around Srebrenica.

Families of the victims, many arriving by cars and buses from all over the country, were begining to fill the grounds of the cemetery early Monday to pay respects to their loved ones.

Since the end of the war, Srebrenica has been located in the Serb-run Bosnian entity of Republika Srpska, while many of its pre-war inhabitants live in the country’s other entity, the Bosniak-Croat Federation.

BOSNIA AND HERZEGOVINA SREBRENICA
Now playing Next
no comment