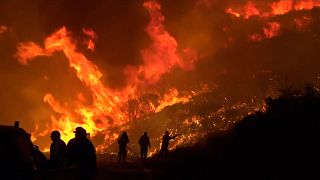 According to the Fire Service, 52 wildfires broke out on Monday, stoked by strong winds and high temperatures.

A wildfire burning uncontrollably on Monday evening across three fronts near the town of Amfissa, in the municipality of Delphi, central Greece, was partly brought under control on Tuesday, the Fire Service said.

Firefighters and volunteers battled with the flames through the night, taking advantage of the improved weather conditions.

Fanned by strong breezes of up to Force 6, the fire burned its way through olive groves towards the convent of Profitis Ilias and also towards the coastal town of Itea.

The convent has been evacuated and firefighters were trying to prevent the blaze from reaching a forested region nearby.

High winds made it extremely hard for the firefighters to contain the blaze. Some 50 firefighters with 15 fire engines and 3 ground teams were being assisted by 5 water-bombing aircraft, as well as municipal water tanks.