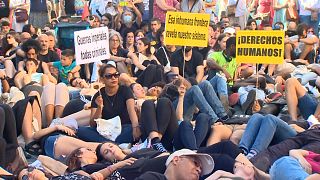 The Moroccan Human Rights Association shared videos on social media that show dozens of exhausted migrants piled up lying on the ground, many of them motionless and a few bleeding, as Moroccan security forces stood over them.