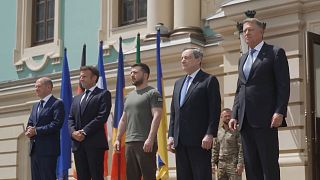 This week, the leaders of France, Germany, and Italy arrived in Kyiv after a 10-hour train journey for their long-awaited first visit to a war-torn Ukraine, along with the Romanian president.

But life goes on as Ukraine's army holds war weddings in the city of Druzhkovka.

Meanwhile in Belgium, Brazilian Indigenous leaders demonstrate in front of EU buildings in Brussels against the disappearance -- and suspected murders -- in the Amazon of British journalist Dom Phillips and land rights activist Bruno Pereira.

And as some Palestinian students start their summer vacation and get to swim in the Mediterranean sea off a beach in Beit Lahia in the northern Gaza Strip, other people strip off and climb on their bikes in the streets of London to raise awareness and share a message: cyclists are vulnerable and deserve more rights. Body positivity and a cleaner environment are two other causes they defend.

Finally, what if coping with climate change means adapting our food habits and turning to insects? A vending machine selling edible insects has been set up at a camping facility in Nagano Prefecture, central Japan.

Its menu consists of 18 types of deep-fried insects, including crickets and grasshoppers. Fancy a snack?