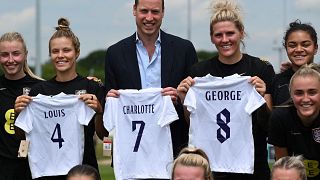 Prince William showed off his football skills on Wednesday when he joined the England women's football team at a training session at St George's Park in Burton-upon-Trent.

During his visit, the Duke of Cambridge took a couple of shots at goal - the second of which was generously let in by the goalkeeper.

The British royal was also presented with three England football shirts, customed made for his three children, Louis, Charlotte and George.