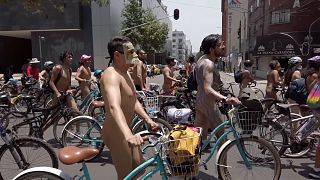 A protest for safe cycling in Mexico City sprouted on Saturday, as participants pedaled and marched naked through some of the busiest avenues in the Mexican capital.

This is the first World Naked Bike Ride (WNBR) staged in two years, since previous iterations were canceled due to the COVID-19 pandemic.

The protesters gathered at the Revolution Monument and rode approximately 17 kilometers (10.5 miles), across the streets of the historic center and Pase de la Reforma avenue.

Protest organizers have said that although the city government has been encouraging the use of bicycles for several years now, there is still a lack of a strong awareness campaign around safety of pedestrians and cyclists.