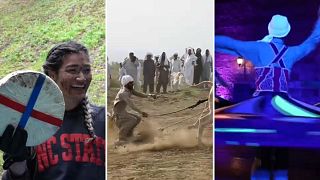 Speaker of the Verkhovna Rada (parliament) of Ukraine, Ruslan Stefanchuk, called on the EU to approve his country's membership application, which ended in a round of applause.

We met also Raha Ghorbani, the 7-year-old Iranian who dreams of becoming a racing champion. When she gets into her father's car, she goes straight for the driver's seat and performs drifts.

And Traditional bullfighting race was held in Rawalpindi, Pakistan, with the participation of over 100 farmers on Monday. The bulls, running against the clock in pairs under the control of their owners on a 400-metre dirt track, provided the spectacle.