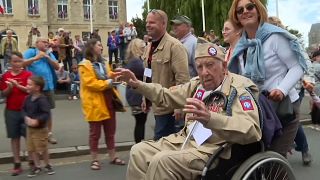 A military re-enactment parade filled the French Normandy town of Sainte-Mere-Eglise on the eve of the 78th D-Day anniversary.

This was the first French village to be liberated from Nazi occupation. The people here have not forgotten their gratitude.

They cheered the handful of D-Day veterans wheeled through the town during Sunday's rainy parade of military vehicles and re-enactment participants dressed up in World War II uniforms.

As the D-Day veterans set foot on the Normandy beaches and other World War II sites this week for the anniversary, it is a bittersweet experience they say.

Joy at seeing the gratitude and friendliness of the French toward those who landed on June 6, 1944.

Profound sadness as they remember their fallen comrades, tinged with anger as they see the casualties and destruction about another war being waged on the European continent, the one in Ukraine.

For the past two years, D-Day ceremonies were reduced to a minimum amid COVID-19 restrictions.

This year, crowds of French and international visitors were back to Normandy to pay tribute to the nearly 160,000 troops from Britain, the US, Canada and other nations who landed there to bring freedom.

Several thousands of people were expected Monday at the ceremony commemorating the 78th D-Day anniversary at the American Cemetery overlooking Omaha Beach in Colleville-sur-Mer.

Amid the dozens of US veterans who are expected to attend is Ray Wallace, 97, a paratrooper with the 82nd Airborne Division.

On D-Day, the plane bringing Wallace was hit and caught fire, forcing him to jump earlier than expected, about 20 miles (32 kilometers) away from the town of Sainte-Mere-Eglise.

Less than a month later, he was taken prisoner by the Germans. He was ultimately liberated after ten months and returned to the US.

On the German side, several thousand were killed or wounded.

Many history amateurs, wearing military and civilian clothes from the period, also came for the re-enactment of the events.