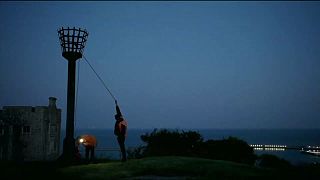 “It’s too f****** windy, mate! I’m trying,” one of the men can be heard saying before finally managing to light it, near Dover Castle.

Around 3,500 beacons were being lit up across the United Kingdom and Commonwealth countries.

The lighting of the principal beacon, placed outside Buckingham Palace, was triggered by the queen in a ceremony at Windsor Castle, and set off a chain reaction of lightings across the country.