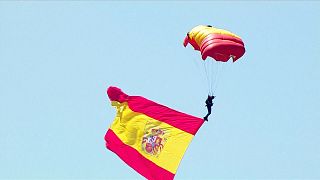 This year, Spain's biggest military celebration is back in its biggest version with a parade presided over by King Felipe VI and Queen Letizia, accompanied by the Minister of Defence, Margarita Robles; the Chief of Defence Staff, Admiral General Teodoro Esteban López Calderón; the President of Aragón, Javier Lambán; the Mayor of Huesca, Luis Felipe; and various civilian and military authorities.

Huesca hosted the military parade two years later than initially planned as a result of the pandemic, which forced the Armed Forces Day to be reduced to austere military events in Madrid in its 2020 and 2021 editions.

More than 3,200 military members, 154 vehicles and 69 aircraft paraded through the centre of Huesca for Armed Forces Day.