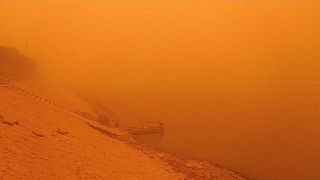 A new sandstorm hit Iraq on Monday, forcing the closure of airports, schools, universities and government offices across the country, officials said.

Sunday morning saw the huge banners being hung on the front of the famous Palais du Festivals, in Cannes, to host the 75th Cannes movie festival ceremony.

Two months ago, Kharkiv, Ukraine's second-largest city, was being battered by the conflict, enduring an assault by Russia's forces lasting several days and fighting in its suburbs. But the noose around Kharkiv has been loosening in recent days, even as the war rages elsewhere.

Eurovision winners Kalush Orchestra launched the #MomsOfUkraine initiative in Lviv, signing their own mothers' names on a large stand.

A smiling Queen Elizabeth II attended the Royal Windsor Horse Show on May 15, days after ill health and old age forced her to pull out of the opening of the UK parliament for the first time in nearly 60 years.

On Thursday, May 12, the 5th International Folklore Festival, also called 'Kharibulbul', kicked off in Shusha, the cultural capital of Azerbaijan.