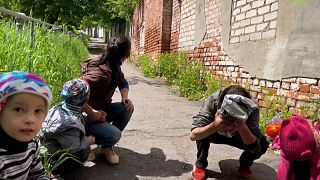 New York is a city of 10,000 mostly Russian-speaking residents that tried to make a fresh start last year by abandoning its Soviet name of Novgorodske and adopting the name chosen by its German settlers in the 1800s.

According to residents, artillery fire began hitting New York a month ago and has intensified daily.