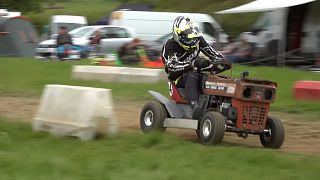 The cream of the British lawnmower racing crop assembled in the Surrey village of Lingfield on Sunday for the start of a new season.

This is motorsport on a budget for people who love to race and have some fun, but there is also a competitive edge here that enthusiasts say is every bit as keen as in Formula One.

The challenge for the dedicated lawnmower racer is to stay consistent across a number of hard-fought events around the country from May to October.

One of them will win the coveted British Lawnmower Championship title.

There are three categories or classes of racing - Group 2 machines look like a traditional lawnmower with a seat attached, Group 3 mowers are more akin to a buggy and Group 4 entries are often described as lawn tractors.

The next Grand Prix meeting is scheduled for two weeks' time in Billingshurst, West Sussex.