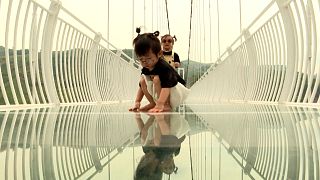 Vietnam launches a new attraction for tourists with a head for heights, with the opening of a glass-bottomed bridge suspended 150 metres (490 feet) above a lush jungle.

The company says it is the world's longest glass-bottomed bridge, surpassing a 526-metre structure in Guangdong, China.

Officials from Guinness World Records are expected to verify the claim next month.