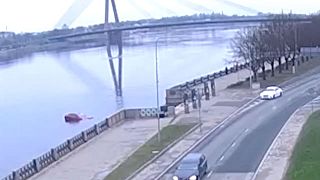 Unoccupied car rolls across road and into river in Riga

An unoccupied car rolled across a busy road and into the Daugava River in Riga, Latvia, on April 14, according to police.

Police said the incident took place after two people parked a car close to the river. Ten minutes later, the car began slowly moving across the road, which police believe was caused by a failure to apply the handbrake.

CCTV footage shows the car rolling across four lanes of traffic while other vehicles swerve or stop to avoid it. The car enters a slipway and rolls into the Daugava River. There were no passengers in the car at the time.

The car was retrieved from the river the next day on April 15, police said.