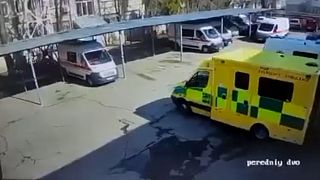 Ukrainian Governor of Mykolaiv Oblast Vitaliy Kim released security footage on Tuesday showing the moment an ambulance parked outside a hospital was damaged by a strike.

Hospitals were among civilian buildings damaged by shelling in the Ukrainian city of Mykolaiv on Monday, April 4, according to Ukrainian officials.

In a statement on Tuesday, the Prosecutor General’s Office said 12 people were killed and 41 were injured, including four children, as a result of Russian attacks on the city on Monday. Residential buildings, vehicles, and hospitals were struck by artillery, the prosecutor said.