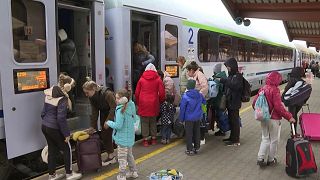 Przemysl continues to receive thousands of people fleeing from Ukraine

The small railway station of Przemysl, on the border of Poland with Ukraine, has become one of the main entry points into Poland for Ukrainian refugees fleeing the war and the place where thousands of refugees wait every day for their onward journey to other cities.

On March 31, there was an increase in the number of refugees compared to the last few days. On the previous day, about 25,000 people entered, according to the Polish border police. Most of the Ukrainian refugees are women, children and elderly people, so volunteer drivers have to register with the authorities before transferring refugees to avoid human trafficking, which humanitarian organisations have warned against.

Since the beginning of the Russian invasion of Ukraine on February 24, more than 2.3 million Ukrainians have crossed the border into Poland, including more than 1.1 million children according to UNICEF.