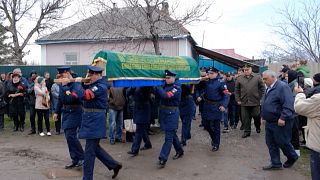 A funeral is held in the provincial Kyrgyz town of Kara-Balta for Rustam Zarifulin, 26, who died fighting for Russia in Ukraine on 14th March. His mother cries loudly: "I won't see him again. Where are they taking him so fast?" as Russian troops transport her son's the coffin. Rustam Zarifulin's funeral, around an hour from Kyrgyzstan's capital Bishkek, is the second of its kind this week in the Central Asian country.