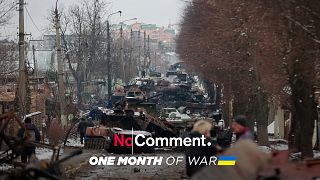 On that date, Russian troops invaded Ukraine from the north, east and south. In just a few hours, they seized the Chernobyl power plant. Ukrainian President Volodymyr Zelensky ordered the general mobilisation of all men over 18. The unthinkable became reality.

Since then Kyiv, Kharkiv, Chernihiv, Mariupol and many other cities have been under constant attack.

Here are the strongest moments since February, 24.