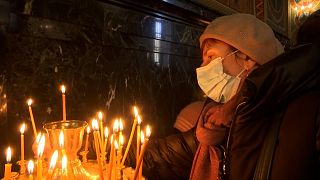 Prayers for 'mercy and peace' at Chisinau cathedral

On Sunday morning the pews in Chisinau Cathedral were filled, as the Patriarch of Chisinau and head of Moldova's orthodox church, Mitropolitul Vladimir led prayers for peace in Ukraine.

After the service, some of the faithful said their thoughts and prayers had been with people in Ukraine since Russia invade the neighbouring country.

Moldova is a small Eastern Europe country with around 2.5 million people and is coping with an influx of tens of thousands of refugees since the beginning of the conflict.

The U.N. refugee agency says more than 2.5 million people, including more than a million children, have already fled Ukraine.