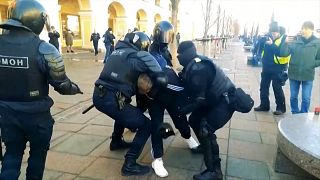 Dozens detained in Russia for protesting "military operation" in Ukraine

Russia detains more than 250 people for protesting its "military operations" in Ukraine, as the conflict continues for a third week.

In the capital Moscow dozens were arrested in Manezhnaya square, close to the Kremlin.

Police detain people in Saint-Petersburg at rally to protest against Russian military action in Ukraine. People can be seen being carried and walked away by police in riot gear.