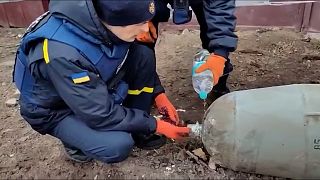 A bomb dropped by a Russian aircraft was disarmed by two members of Ukraine’s State Emergency Service in Chernihiv on March 9, the agency said.

The Ukrainian SES released footage of the delicate procedure.

On March 9, Amnesty International said a Russian airstrike that reportedly killed 47 civilians in Chernihiv may constitute a war crime and called on the International Criminal Court to investigate.