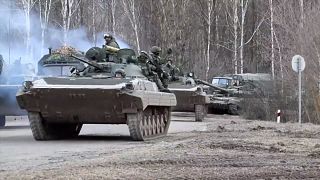 Russian troops advance into Kyiv region in Ukraine, according to the Russian Defence

On Thursday, the Defence Ministry released a video showing the movement of the Russian Armed Forces in the Kyiv region during what the Russian government calls "a special military operation" in Ukraine.

As the video shows, the Russian military entered the Kyiv region with the support of helicopters and crossed the river using a temporary pontoon crossing.

As of 3 March, 2,870 Ukrainian militaries were killed, and about 3,700 people were injured during the special military operation of the Russian Federation in Ukraine, the Defense Ministry reported on Wednesday.