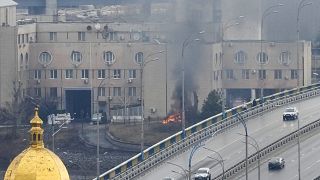 Air raid sirens sounded in the Ukrainian capital, Kyiv on Thursday morning as Russia launched a military operation in Ukraine, attacking several cities with missiles and dispatching troops to the country.

Videos captured by eyewitnesses showed long queues of cars at petrol stations across the country amid the sounds of explosions.

Putin authorised a military operation in eastern Ukraine early Thursday, which was followed by reports of explosions in the capital Kyiv and other cities across the country.