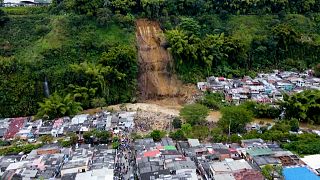 Many killed, injured in mudslide in west Colombia

Heavy rains caused a mudslide to sweep through a residential area in a western Colombian town on Tuesday morning, killing at least 14 people and injuring 35 others, authorities said.

Early morning rains triggered a landslide on a mountain in west-central Risaralda province, burying several houses in the poor municipality of Dosquebradas.

The disaster relief agency released a photo showing a gap in the lush vegetation following the mudslide.

Rescue teams said they feared further mudslides could cause a dam to form on the nearby Otun River, exacerbating the disaster.

Several families living near the river have been evacuated due to the risk of flooding.

Viktor gently cranks away at his old music box on the corner of a main road in Ukraine's eastern city of Kharkiv, sending peaceful music tinkling out onto the city's war-torn streets in an attempt to bring "happiness" to passers-by.