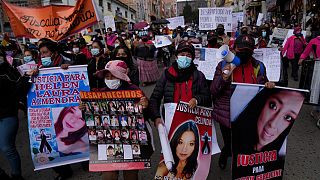 Hundreds of people rallied in the Bolivian capital La Paz on Monday in protest at violence against women.

It followed outrage over the case of a serial rapist who received a 30-year sentence for homicide but was released on medical grounds in 2019 after serving just a few years.

The man was re-arrested last week after the bodies of two women were found buried at his home.

The judge who released him in 2019 was arrested at the weekend over the decision to free him.