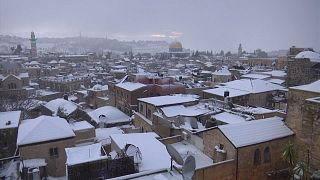 Residents in Jerusalem woke on Thursday to a blanket of snow that covered some of the city's most iconic sites.

The Old City's ancient rooftops were white and the golden Dome of the Rock mosque was dusted in snow.

White-flecked church crosses and mosque minarets jutted up toward the grey sky.

A winter storm has been battering the eastern Mediterranean, bringing heavy rains and wind to the Middle East.