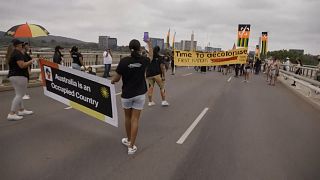 Australia Day commemorates the 1788 landing of British convict ships in Sydney and the settlement that was established by those on board.

In the nation's capital, protesters marched to Parliament and called for the holiday to be abolished.

They claimed that historical wrongs were committed against the country's indigenous people after the arrival of British ships in Australia.

In Melbourne, a statue of British explorer Captain James Cook was painted red.