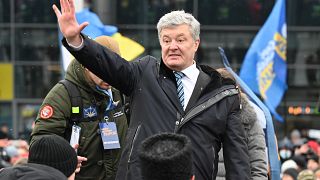 Poroshenko, who served as president from 2014 to 2019, was placed under investigation for high treason and left Ukraine in December.

He returned to Kyiv early on January 17th on a flight from Warsaw and passed through passport control amid chaotic scenes, saying later that border guards had tried to prevent him from entering the country.

Thousands of his supporters gathered near the airport to meet Poroshenko.

He told them he had returned to help Ukraine face the "growing threat of Russian invasion" and accused his successor, President Volodymyr Zelensky, of "betrayal" of the country.

Tensions are at an all-time high between the West and Russia, which Ukraine accuses of having massed troops on its border ahead of a possible attack.

"We are here to unite and defend Ukraine," Poroshenko told the crowd, which held up posters reading "We Need Democracy" and "Hands off Poroshenko".

"Now I'm heading to the court where we'll give them a fight," he said.

Poroshenko, 56, is one of the country's richest men. He was elected president after Russia annexed the peninsula of Crimea and as fighting escalated between Kyiv's troops and Moscow-backed separatists in the industrial east of the country.

In 2019, he was trounced in a presidential election by Zelensky, a comedian with no previous political experience at the time.

Poroshenko is now a member of parliament and leader of an opposition party, European Solidarity.