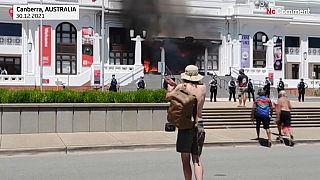 The cause of the fire wasn't immediately clear, although a group of protesters championing Indigenous rights had been gathering outside the building.

Some protesters told media the fire began as a traditional smoking ceremony that got out of control. But one witness told Melbourne radio station 3AW that he heard protesters chanting "let it burn."

The Australian Capital Territory emergency services said they were called to the scene just before noon and found the front doors alight. The building was evacuated as a precaution and crews extinguished the blaze.

Protesters had earlier lit a fire at the building on December 21 and there had been daily protests outside the building for the past five days.

The building was home to the federal parliament from 1927 through until 1988, when a new building was opened.

The building is now listed on the National Heritage Register and is home to the Museum of Australian Democracy. The museum's website said it was closed until further notice.